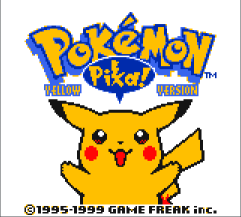 My first experience of Pokemon was playing on my babysitter's copy of Pokemon Blue (with firm instructions not to save over her file). When I got my own copy, it was Yellow version. That was my first experience being excited for a video game, and I can still remember that moment I held the box for the first time.

A common question you see asked when people go back to the earlier games is how much more difficult they are than the newer, "hand-holdy" generations. To me, the answer is that they're more difficult, sure, and a lot more clunky. But it is a game for small children, and the challenges that stumped my six-year-old brain are rather less insurmountable now. Viridian Forest, which I remembered as a vast, twisting labyrinth, is actually a tiny passageway, most of it not even through tall grass. And then, of course, there's Brock. 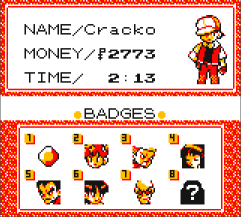 For me and my Pikachu, Brock was a brick wall. I only beat him the first time with the help of my babysitter's Wartortle. Yet even as a child, that felt like a hollow victory. So I restarted, and grinded until I was able to brute force him with chip damage from Pikachu's Quick Attack, which was a tedious experience to say the least.

This time, I actually bothered to look up what Pokemon I could catch with a a type advantage to Brock's, and my Mankey decimated the entire gym. When you get down to it, these are not very difficult games, which is fine for me; I'm not really interested in challenge runs.

What I most enjoy about these games is the sense of exploration, of finding and befriending new creatures. Over the course of my playthrough of the series, I definitely want to catch 'em all, and as I do, find all those little details in the games I overlooked as a child. More than the difficulty, it's the Pokemon world itself I want to explore the evolution of.

The reasons why it sucks have all been enumerated many times by many people, but in particular I forgot how they introduce the concept of Repels with an NPC in Pewter Town, yet don't give you access to them in the proceeding dungeon where you'd really want some. 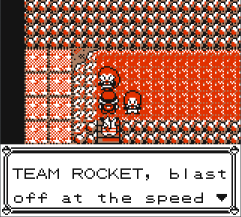 I know some people don't care for them, but I like the anime affectations in Yellow, adding in Jesse & James, etc. Adds a bit more flavor to game, imo. And more games in the series should give you access to the starters via events like Yellow does.

So at this point, I've steamrolled Misty with my Pikachu and beaten my rival once more. In my save I've just cleared Nugget Bridge.

Now, there's a certain trainer on this route involved in the famous Mew Glitch. I've never done it myself, and I debated whether I wanted to avoid battling the trainer to perform the glitch when I get Fly.

Ultimately, I decided against it; I'll catch Mew another time. I'm not much into glitch hunting in general, even if I find the writeups fascinating. This Let's Play of Pokemon Blue in particular is super cool for showcasing all the terrible ways you can break the first generation games. As I immerse myself in the series more, I hope I'll find more cool fan content to mention here. 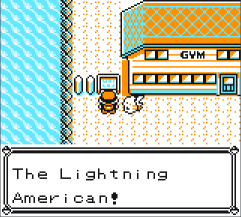 I always forget how many real-world references the early Pokemon games contain. When I was getting ready to replay Yellow, I looked to see if there were any good lightweight romhacks to try. I found a promising one, but its description stated that it actually rewrites these bits of text to get rid of things like the picture to the left, or the dish of the day on the S.S. Anne being salmon. But for me, these fun bits of flavor text are part of the nostalgia, and nostalgia is mostly why I'm replaying the games in the first place.

You can tell that they hadn't yet fleshed out the idea of the Pokemon world at this point. Not that the later games really dive deep into Poke-lore either. I think this is deliberate, keeping the Pokemon world mostly to the idea of a near, optimistic future where humanity lives largely in harmony with nature and technology.

(I one-shot Surge with my Dugtrio.)

Going through Gen 1, it's been really interesting re-experiencing a Pokemon game written before that became a household name. The real-world references are one aspect of that; I feel Pokemon Tower is another good example. 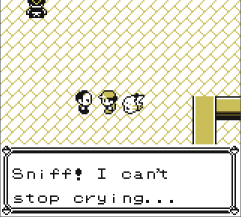 It's not like later Pokemon games never touch on difficult subjects. People can point to some of the more infamous Pokedex entries, or Sun and Moon's themes of child abuse and neglect.

Yet those things are always at the edges; nowhere in the series is as upfront as the Pokemon Tower. The music, the rows and rows of gravestones, the plain sadness and grief really add something memorable to a game where story and setting are pretty barebones. There's even debatably a subtle bit of storytelling to the encounter with your rival in the tower (if you subscribe to the theory that his Raticate died).

And then there's Celadon, with its skeezy gambling den. Even the next couple gens before they took out the gambling altogether didn't capture the desperate vibes of a casino so well as Gen 1 does. Heck, even the guy who gives you tips in the gyms abandons his post to waste his savings on the slots!

And, uh, speaking of the gym, I'm pretty sure later gens have nothing like the creepy old man leering through the window at the all-female trainers, half of which are clearly underage Lasses and Jr. Trainers. Or said trainers calling your ten-year-old player character a peeping Tom.

What I'm saying is, Gen 1 is a land of contrasts.

So, an interesting thing happens after Celadon city. Two gyms actually open up to the player, the psychic-type Saffron and the poison Fuchsia. They're a huge spike in levels over both the surrounding routes and even their own gym trainers-- the latter being in the early-to-mid thirtys while the former both reach level fifty. I guess the level spike is justified by the sheer amount of trainers stuffed into the various areas nearby; Silph Co. alone has over thirty. It's a weird part of the game's level curve and progression, to be sure. 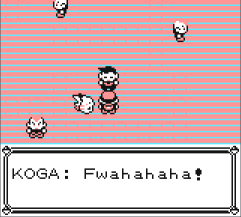 After liberating Silph Tower and obtaining the master ball, I decided to challenge Fuchsia gym first. Though technically the sixth gym and the way to unlock Surf, Koga's pokemon have a lower average level than Sabrina's. Despite being a poison-type leader, most of his gym trainers use psychic and ground pokemon. Like I said, real odd patch of the game.

To beat him, I naturally decided on a psychic pokemon of my own. Since I'm unable to make use of trade evolutions in my game, I decided to evolve my Kadabra, Spoon, using a save editor called PkHeX. Call it a cheat, but hey. I found it oddly fun to mess around with the data of one of my favorite childhood games. Maybe I'll muck around more with it another time.

After defeating Koga, I headed to the Safari zone for a few rounds. I'll be honest, I didn't catch everything available, as I find the safari mechanics really tedious--especially since the internet confirmed my suspicions that there is no actual strategy to the bait-and-rock throwing and you're best off mindlessly mashing A to throw balls in every encounter. Maybe I'll revisit the zone in later, or just catch that Kangaskhan in a different game.

After that, it was onto Sabrina, where my Dugtrio, Diggy, continued to be MVP of my playthrough. Blaine fell the next day to my surfing Blastoise, Spurt. The curve continues to be weird--one of Blaine's pokemon is actually lower-leveled than Sabrina's, despite multiple routes and almost two dozen trainers between them. ¯\_(ツ)_/¯

Finally, it was time to face the first of the legendary birds. As a child I had very little luck with these--savescumming in front of legendaries never crossed my mind, so one shot was all I had.

Thankfully, this time, it only took one attempt to capture Articuno. My younger self would have been proud. 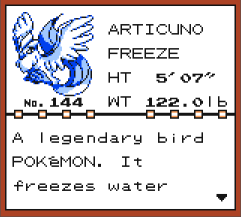 After a sidetrip to the Power Plant and Zapdos, I blasted through Giovanni and destroyed Team Rocket forever(?). Then, it was onto the Pokemon League. There's been a bit of a pattern in this playthrough: I get nervous about boss battles, remembering how I struggled so much with them as a child, and yet now I tear through them with ease.

The Pokemon League proved no different. One by one, the Elite Four fell before me. My greatest ally was the terrible AI (shoutout to Gary's Exeggcutor trying to use Leech Seed five times in a row). When I started this playthrough, I definitely didn't think I'd find myself wanting a more difficult game, and yet I feel like it kind of cheapened my victory with how poorly my opponents played. Something to think about for the future when I start looking into romhacks.

Regardless, victory was indeed mine, and I entered the Hall of Fame. A quick trip to Cerulean Cave and a tossed Master Ball later, and I caught Mewtwo--and so I finished Pokemon Yellow. My final pokedex count came out to 101; I'm not to fussed about completing it now, as I've got later games including the Kanto remakes to catch the remainder. I've actually started tracking my dex progress online here.

So now for my final thoughts: I definitely enjoyed the experience overall. Easy or not, it's been a long time since I beat a Pokemon game, and seeing the Hall of Fame screen brought back lots of fond memories. I enjoyed the journey, too. Kanto is smaller than I remember, more compact, and rougher around the edges. I can definitely see a lack of polish and consistency compared to later games. Yet it's still a blast to explore, filled with so many cool critters to befriend; I had fun just refreshing my memories of the original 151, and finding surprising new favorites in pokes like Dugtrio.

My main gripes were with the clunkier gameplay systems. The way boxes are handled just sucks, it takes forever to manage pokemon. I know I have a couple generations to go before that improves. But it'll be a longer time still that I have to deal with the HMs. It seems strange how long it took for them to fix that, considering what an unfun chore it is to have to choose between nerfing your team with crap moves like Cut and Flash or constantly switching out pokemon. Oh, and the inventory limits were painful--I stopped picking up most items around the seventh gym. But ultimately, these details didn't drag down the experience too much for me.

The presentation was very nostalgic. I liked the spritework and the sort of abstract tilesets of the environment (those potted palms are aesthetic af). The music had some surprising bangers, too: my favorite tracks were the Pokemon Mansion tune and the Champion battle theme.

All in all, a good start to my series playthrough. I want to check out some of the early Pokemon spinoffs next, and then it's onto my favorite of the series: Crystal.

Final team lineup: Diggy the Dugtrio, Spoon the Alakazam, Spurt the Blastoise, Chuuko the Pikachu, Monke the Primeape, and Tulip the Venusaur.